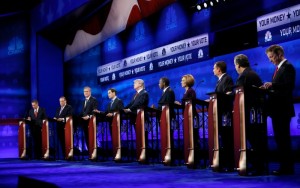 Reportedly drawing in around 10 million total viewers, the CNBC event will be the network’s highest-rated program ever, but the figure falls well short of Fox’s 24 million and CNN’s 23 million for their GOP debates.

Further complicating CNBC’s ratings loss is the fact that its debate aired opposite the NBA’s opening night and Game Two of the 2015 World Series. Read more at CNN.