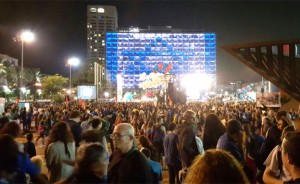 A memorial ceremony to mark 20 years since the assassination of late Prime Minister Yitzchok Rabin took place on Motzoei Shabbos in Tel Aviv’s Rabin Square, the same place where Rabin was murdered by right-wing extremist Yigal Amir after a 1995 peace rally. The rally was named: “Remembering the murder; fighting for democracy.”

President Reuven Rivlin, in his opening remarks, said that when Rabin was slain, Israeli democracy, society and hopes were all in the crosshairs, but that Israel would never fall on the altar of violence. Rivlin condemned incitement, and proclaimed that Israel did not lose its democratic values even in complicated times of terror. He said Israeli democracy was strong enough, and Israelis brave enough, to include everyone equally.

“Though we argue over the way,” he said, “we have common hopes and dreams, and are united against extremism and racism.” “We strive for a democratic and Jewish Israel of which everyone can feel a part.” “Let the IDF defend our home, while you fight for your dreams, our common dreams.”

Dalia Rabin, daughter of the slain prime minister, introduced former US President Bill Clinton, who flew to Israel especially to address the rally.

Clinton said that when Rabin signed the 1993 peace accord, he told Clinton that he never wanted to see Israel come to a crossroads and have to decide whether it’s better to be a democratic state or a Jewish state. Rabin refused to give up the dream of peace in the face of violence, telling Clinton, “We will fight terror as if there were no negotiations, but we will negotiate as if there was no terror.”

Clinton told those gathered that Rabin “risked his life defending Israel, spent his life serving Israel, and gave his life so you could live in peace.”

He urged his audience to decide how to finish Rabin’s story, as the last chapter must be written by the people for whom he gave his life. “Rabin was right,” said Clinton, “you have to share the future with your neighbors; the risks of peace are not as high as the risks of not making peace.”