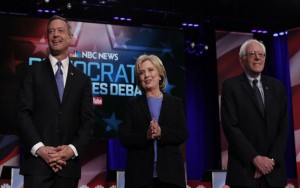 Democratic presidential candidates Hillary Clinton and Bernie Sanders faced off in the fourth debate on Sunday, with the former secretary of state accusing the Vermont senator of being weak on gun control.

“He voted to let guns go on Amtrak (trains), guns go into national parks. He voted against doing research to figure out how we can save lives,” she said.

Sanders said he had a good record on standing up to the NRA and called Clinton’s statement “disingenuous.”

Though Clinton leads in national opinion polls, Sanders has enjoyed a recent rise in early-voting states of Iowa and New Hampshire.

Former Maryland Governor Martin O’Malley, who is trailing behind in the polls, also appeared alongside Sanders and Clinton. Read more at NBC News.