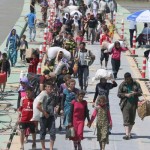 Democratic presidential candidate Hillary Clinton on Tuesday said that the Islamic State is committing genocide against Christians, Yazidis and other religious minorities in the Middle East.

“I think I was asked this a couple months ago, and I said that term carries with it legal import, it is a very important concept and label for behavior that deserves that name,” Clinton responded to a voter at a town hall in Berlin, New Hampshire.

The voter asked Clinton if she was willing to join other leaders in designating the Islamic State’s persecution against religious minorities as genocide.

“I am now sure we have enough evidence, what is happening is genocide deliberately aimed at destroying lives and wiping out the existence of Christians and other religious minorities,” Clinton said.

The Obama administration has yet to decide if it will officially designate Islamic State violence as genocide.

Meanwhile, terrorists are still holding hostage over 3,000 Yazidis, confirmed a Yazidi activist who escaped from the Islamic State last year after being used as a sex slave.

“At this moment there are 3,400 people in detention who are Syrian or Iraqi,” 21-year-old, Nadia Murad Basee Taha told Greek President Prokopis Pavlopoulos during a visit to Athens.