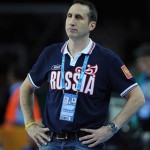 David Blatt, the new head coach of the NBA’s Cleveland Cavaliers, and the first Israeli to lead a professional U.S. basketball team, said Israel was justified in its war against Hamas and the other terrorist groups in Gaza, in an interview with Israel’s Globes published on Friday.

When asked if he supports Israel’s Operation Protective Edge, Blatt said, “Absolutely. In my opinion, this war is Israel’s most justified war I can remember in recent years.”

“I‘m really sorry about what’s happening in Gaza, but there’s no doubt that we had to act there, so that Israel will have quiet there once and for all, and we can live in peace,” Blatt said, who added that he is “uncomfortable” not being in Israel during this war.

“I’ve always been in Israel at the hardest times,” he said. “Since Operation Protective Edge began, I feel being in Israel is the most natural thing for me to do. My work is here, though, and I have to get ready for the coming season.”

“It’s not easy for me when I’m constantly thinking about what’s happening in Israel,” Blatt said. “My two older daughters happen to be on their global post-[Israeli] army service tour, my son is overseas playing in in the European Youth Basketball Championship, and my youngest daughter is also out of the country for a few days. They’re all returning to Israel, though, and I’m planning on seeing them again at the beginning of August.”

“I had a plane ticket with Delta Airlines, but I changed to El Al as soon as Delta canceled its flights on to Israel,” he said, referring to the 24-hour flight ban imposed by the U.S. FAA last week.

Recent polls showed that 70 per cent of Americans do not believe that Hamas is justified in its war against Israel, the same poll showed only 42 per cent believe Israel is justified against Hamas. Blatt said, “There’s support, although sometimes it’s not enough. In my opinion, though, there’s more support this time than before.”

In an interview published by The Algemeiner last month, Blatt, 55, described growing up in Framingham, a suburb of Boston, listening to the iconic raspy radio voice of Johnny Most, the long-time announcer for the Boston Celtics, led by Jewish coach Red Auerbach, who won nine NBA championships in 10 years.

Blatt went to college at Princeton University, where he majored in English literature and played basketball for legendary coach Pete Carril. In his sophomore year, Blatt was recruited to play in the summer league for the basketball team at Kibbutz Gan Shmuel, in Israel.

“I really had not had designs on making Aliyah growing up or well into my college experience, but I was invited to spend a summer in Israel by a nice gentlemen and a coach in Israel who saw me play with Princeton, and I fell in love with Israel,” Blatt said. “That was a life-changing experience because I ended up spending 33 years there.”

Blatt immigrated to Israel as a basketball player when he was 22. After a successful career as a player, he went on to become the coach of Maccabi Tel Aviv, which he led to a stunning comeback victory from a 15-point deficit against CSKA Moscow in the Euroleague semifinals in May. Their next game was another upset victory in the championships over Real Madrid, sparking jubilant celebrations across Israel.

A month after the Maccabi victory, Blatt announced plans to leave the Israeli team to pursue his dream of coaching in the NBA. A week later he was hired by the Cavaliers, becoming the first coach to move directly from the European leagues into an NBA head-coaching job.