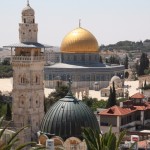 Since the recent outbreak of terrorist attacks in Israel over the course of the past few weeks, the Israeli government has repeatedly condemned the PA for its incitement and denounced the claim that Israel is seeking to change the status quo as a “big lie.”

Prime Minister Netanyahu sought once again to rebuff the accusations of any such intended change vis-a-vis the Har Habayis  on October 24, stating that “Israel re-affirms its commitment to upholding unchanged the status quo of the Temple Mount, in word and in practice. As we have said many times, Israel has no intention to divide the Temple Mount, and we completely reject any attempt to suggest otherwise.”

Nevertheless, the spate of violence which has swept across Israel during the past few weeks has brought the religious site of the Har Habayis into question yet again, prompting the international community to place a question mark over its status and the way in which it is controlled.

In an interview with TPS (Tazpit Press Services), the senior Pastor at King of Kings Jerusalem Community, Chad Holland concurred with Netanyahu’s comments stating that he was unaware of any ongoing official change to the visiting rights of Muslims.

Some international figures, including PA leader Mahmoud Abbas, have made various recommendations such as installing a UN presence to monitor the situation and restore calm.

However, Pastor Holland rejected the notion that such an initiative would allay the recent tensions. “I do not think an international presence would be better for the Old City in Jerusalem. Israel maintains order and peace very well until Islamic leaders seek to inspire their people to lash out in violence, and seemingly to instigate a security response from Israel,” he said.

In addition, Reverend Pileggi from the oldest Protestant church in the Middle East, echoed similar sentiments to TPS.

“From our point of view, as Christians, Israel has done a good job of guaranteeing access to holy places although there is some room for improvement,” he said.

However, when asked about the proposal of an international presence, his answer was unequivocal: “The solution isn’t the internationalization of Jerusalem but finding a way in which different faiths can better understand one another.”

He added that while the recent rise in violence may convince Israel to abandon its claim over the Jerusalem issue, “we hope that the recent disturbances would renew Israel’s commitment to the welfare of all residents of this city and the protection of holy sites for all believers.”

Under Jordanian control of the Old City from 1948-1967, Israeli Arabs were denied access to the Al-Aqsa Mosque and the Dome of the rock. Similarly, while Christians were granted access to their holy sites, the number of people authorized to enter the Old City and Bais Lechem during their holidays was restricted.

Moreover, property restrictions forbidding Christians from purchasing land in Yerusshalayim were imposed on the Christian residents while institutions of faith were compelled to abide by strict state controls. Religious Christian schools were required to teach Arabic and forced to be closed during Islamic holy days.