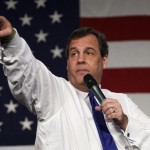 A new national poll from Fox News indicates that New Jersey Gov. Chris Christie may have to be in the undercard round of the next GOP presidential debate, reports Gideon Resnick for the Daily Beast.

Fox Business Network made it a prerequisite that candidates have an average of at least 2.5 percent in the four most recent polls conducted through Nov. 4 for the Nov. 10 event. Christie polled at just 2 percent in a Fox News poll Wednesday night, putting his average at 2.25 percent. George Pataki and Bobby Jindal are, at this point, disqualified from either debate based on the current standards.

The official lineup will be announced Thursday night. The rules could always be changed at the last minute, but there is no indication that the network will do so. “Under the criteria, he is in,” Rand Paul’s chief strategist, Doug Stafford, told The Daily Beast. He said Sen. Paul has no plans to change his debate preparation and as of now, polling at 4 percent in the recent Fox News poll, he will make the main stage. The Christie campaign and the Jindal campaign have yet to respond to a request for comment.