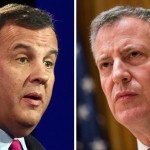 After Christie sent a letter to President Barack Obama last week saying his state will not accept any refugees from Syria over fears that it could open the door for terrorists to enter New Jersey, de Blasio called Christie’s comments an “embarrassment” and then at a news conference displayed a notorious photo of a rescuer holding the body of a young Syrian boy who drowned months ago off the Greek coast as his family fled for freedom.

“I’d like to know what Governor Christie says about this,” the mayor said. “This is the cost of not bringing in people who are innocent victims.”

Speaking on CNN’s “State of the Union” on Sunday, Christie fired back at the mayor.

“As murders rise 11 percent in New York City, as the commissioner of police in New York says that homelessness and vagrants on the streets continue to rise to new high levels, believe me, Mayor de Blasio should worry more about trying to get something done in the city of New York to make it safer than he should worry about criticizing anybody else,” the Republican presidential candidate said. “And quite frankly, given the way he’s talking and not worried about the security and the safety of the people in New York, maybe he should be mayor of Damascus.”

When pressed about why he opposes allowing even women and small children from Syria to be placed in New Jersey, Christie said: “The FBI director sat before Congress last week and said they cannot vet these folks. Secondly, we had a woman who was wearing an explosive vest in Paris who blew herself up when approached by police this week. I don’t understand the distinction, quite frankly, and what we need to do is protect the homeland first.”