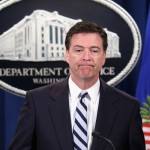 After FBI Director James Comey told CBS’s 60 Minutes that Chinese hackers have been hitting major U.S. companies and costing the U.S. billions of dollars each year, China lashed out in response on Thursday.

“We express strong dissatisfaction with the United States’ unjustified fabrication of facts in an attempt to smear China’s name and demand that the U.S. side cease this type of action,” declared a Chinese foreign ministry spokesman.

He also pointed out a belief widely held in China, which is that the U.S. is hypocritical. “We also demand that the U.S. side cease its large-scale systematic Internet attacks on other countries. The United States tries to divert attention by crying wolf. This won’t succeed,” he said. Read more.