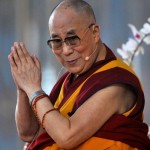 The debate over whether or not the Dalai Lama will reincarnate has reached a boiling point in China, as one of its prominent party officials recently told reporters that “Decision-making power over the reincarnation of the Dalai Lama, and over the end or survival of this lineage, resides in the central government of China.”

The Dalai Lama recently said his spiritual lineage might end with him and that he might not reincarnate. This would upend plans by the Chinese government to pick a successor who would support its control of Tibet.

The Chinese official, Zhu Weiqun, shrilly declared that the Dalai Lama’s musings are “in religious terms, this is a betrayal of the succession of Dalai Lamas in Tibetan Buddhism. The 14th Dalai Lama has taken an extremely frivolous and disrespectful attitude toward this issue.” Read more at The New York Times.