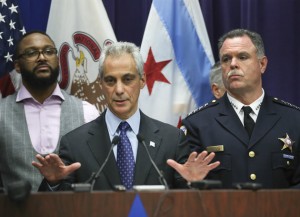 The head of the Chicago Police Department was fired Tuesday amid widespread criticism over how authorities responded to the fatal shooting of a black teenager by a white police officer last year.

Mayor Rahm Emanuel (D) said he formally asked Garry F. McCarthy, the Chicago police superintendent, for his resignation on Tuesday morning, a week after video footage of the shooting was released and the officer was charged with murder.

“He has become an issue, rather than dealing with the issue, and a distraction,” Emanuel said. He added that while he is loyal to McCarthy, whom he praised for his leadership of the department, the needs of the city are more important.

Anger has erupted in Chicago since authorities released footage of Jason Van Dyke, a city police officer, shooting Laquan McDonald, a 17-year-old, last year. In the video, Van Dyke is seen firing a volley of shots at McDonald, many of them after the teenager had already fallen to the ground.

Emanuel said he began talking to McCarthy on Sunday, after several days of heated protests, about “the undeniable fact that the public trust in the leadership of the department has been shaken and eroded.”

The end of McCarthy’s time atop the Chicago force marks a abrupt shift for a law enforcement officer who became nationally known as he worked in three of the country’s biggest police departments.

When Emanuel announced McCarthy’s appointment in May 2011, he praised him as someone who proved “reducing crime and working closely with the community are not conflicting goals.”

Before McCarthy, 56, came to Chicago, he served as the police director in Newark and was an officer and deputy commissioner of the New York Police Department. In New York, he oversaw the CompStat system, which is used to monitor crime data and was adopted by law enforcement agencies across the country. He spent a quarter of a century with the NYPD before the department said he retired in 2006 as deputy commissioner for operations and headed to Newark.

During his time in Newark, the number of homicides declined, according to FBI data. The same month his appointment in Chicago was announced, the Justice Department launched an investigation into the Newark police force, looking at reports of how officers used force and complaints of excessive force that occurred before and after McCarthy took over the Chicago police force. The Justice Department said last year it had found “patterns of misconduct” in Newark, releasing a report that did not mention McCarthy, and reached an agreement with the city to have its force overseen by an independent monitor.

When McCarthy arrived in Chicago to lead the country’s second-biggest local law enforcement agency, he was seen as an outsider who did not understand the nuances of the city’s most impoverished neighborhoods. He also stepped into a culture tainted by a legacy of police abuse going back decades. The city was struggling to confront that legacy through settlements with victims and an effort to rebuild trust on the streets — trust that, for many, was irrevocably broken. Gun violence also mounted: In his first year in office, homicides jumped above 500, creating a crisis that screamed across national headlines.

McCarthy also dealt with anger directed at the city’s top officials resulting from Emanuel’s decision in 2013 to close dozens of public schools as well as an ongoing foreclosure crisis that worsened neighborhoods that were already marginalized from booming development downtown.

Despite those challenges, police reform experts say McCarthy was a progressive in implementing preventive policing programs. Among them was the Chicago Violence Reduction Strategy, a partnership funded by the MacArthur Foundation and led by several academic institutions, including the University of Chicago, that created a database to monitor gang activity to the granular level in order to predict and prevent violence.

Andrew Papachristos, a sociologist at Yale University who works with the Chicago Police Department in developing the database, said McCarthy was “a very forward-thinking cop” compared to his predecessors. He said McCarthy also implemented violence-prevention reform programs in Chicago that highlighted rebuilding trust and legitimacy before they took hold on a national level.

According to police data, civilian complaints against police have fallen 38 percent between 2011 and 2015.

“He was at the forefront of police leaders in this country,” Papachristos said. “From the research side of things, he opened the door and was one of the first people who said, ‘Let’s try this.’”

McCarthy had also been very outspoken about tightening gun laws, calling for harsher penalties for people who have violated gun laws and saying that illegal gun possession in Chicago was directly tied to the number of homicides.

“There’s very few police chiefs in the country that have his institutional knowledge of crime-fighting,” said Chuck Wexler, executive director of the Police Executive Research Forum, a nonprofit that guides departments on policies and practices.

City leaders and demonstrators had called on Emanuel to remove McCarthy, arguing that new leadership is needed to reassure a troubled public. Last week, a dozen members of the City Council’s black caucus gathered to reiterate these calls for new leadership.

Many demonstrators and activists say they didn’t feel the effect of McCarthy’s efforts.

Asiaha Butler, president of RAGE, a community advocacy group for Englewood, a South Side neighborhood, said the only noticeable policy change under McCarthy that she saw was “an abundance of cops” on the streets, but with little effort to build relationships.

“It was like the only solution [to violence] was to get so many cops in this space,” she said. “It didn’t defuse the tension. We just saw more of a presence, and the more presence we saw, we saw more bad apples and more disrespect.”

Tio Hardiman, a community activist who was one of several who marched last week demanding McCarthy’s resignation, said the superintendent’s tactics were ineffective on the street level.

“None of his plans have worked. He said he would hold the police accountable with CompStat numbers, but who is holding them accountable? Nobody,” he said. “They wanted the people of color to work with police and have a good relationship with them, but they are not returning the favor.”

McCarthy is now the second head of a major police department to be dismissed in recent months after unrest over a fatal encounter involving officers. In July, Baltimore Mayor Stephanie Rawlings-Blake fired her police commissioner, Anthony Batts, saying he had been a distraction as the city reeled from rioting after the death of Freddie Gray.

Emanuel’s decision to dismiss McCarthy also coincides with growing public anxiety over a rise in violent crime in Chicago and other big cities across the country. More than 2,700 shootings have been reported in Chicago so far this year, topping the total for all of last year, and more than 430 of them have been fatal.

During an October meeting of more than 100 of the country’s top law enforcement officers and politicians in Washington, Emanuel said his police department has turned “fetal” due to increased focus on how police use deadly force and protests after high-profile deaths at the hands of police. He also said this prompted officers to pull back from policing. That drew a rebuke for Emanuel back home, as the head of the police union argued that officers are not backing down.

More recently, though, outrage has mounted over the long lag between McDonald’s death in October 2014 and last week’s release of the video and charges against Van Dyke. In the interim, Emanuel was reelected to a second term after an unexpected runoff.

“We live in this post-Ferguson environment, where the public demand for openness and transparency is often at odds with a more deliberate, bureaucratic system that doesn’t always have the same sense of urgency in dealing with allegations of police misconduct,” Wexler said.

Since the video’s release, Emanuel has said he fully supported McCarthy, a position he held publicly until word leaked shortly before the news conference that he had asked him to step down. On Sunday, Emanuel and McCarthy announced plans to put body-worn cameras onto officers in several new city districts by the middle of next year.

As recently as Tuesday morning, McCarthy was conducting interviews and responding to the calls for him to step down.

McCarthy acknowledged missteps, saying in an interview with NBC Chicago on Tuesday morning that the initial press release about the shooting, which said McDonald had continued to approach officers and disregarded orders to drop his knife, “was mistaken.”

In addition, a spokesman for the police union had said after the shooting that McDonald lunged at police with a knife. Last week, that spokesman said he was relaying information told to him by other people on the scene and said he never spoke with Van Dyke.

But McCarthy said his authority in the Van Dyke case was limited, as an outside agency and federal officials investigated what happened. A federal probe into the shooting is still ongoing.

“The things that I have authority over are training, policy and supervision,” McCarthy said.

McCarthy also defended how the city has responded to the protests that have erupted since the shooting video was released last week, praising “incredible restraint by officers.”

However, calls for McCarthy’s ouster have continued in the days since the video was released. On Tuesday, the Chicago Sun-Times published an editorial saying McCarthy “has lost the trust and support of much of Chicago.”

A coalition of Latino political leaders in Chicago has also called for the resignation of Anita Alvarez, the two-term Cook County state’s attorney who announced the charges against Van Dyke last week.

In addition to announcing that McCarthy would step down, Emanuel said Tuesday he had created a task force focused on police accountability that is intended to improve independent oversight of the police and the way authorities respond to police officers who receive multiple complaints. The task force is also meant to determine if the city should change its policy of not releasing footage of police shootings.

This group’s recommendations will be presented to Emanuel and the Chicago City Council at the end of March, he said.

Despite that announcement, some are wary. Alderman Carlos Ramirez-Rosa said the city needs a police reform investigation independent of City Hall and not accountable to Emanuel.

McCarthy’s resignation is “a step in the right direction,” Ramirez-Rosa said, but he added that the City Council must act now to push for an independent inquiry into the McDonald shooting.

Many are already warning that McCarthy’s resignation should not be mistaken for true police reform, the kind they say is desperately needed in Chicago.

Craig Futterman, a University of Chicago law school professor who works with police accountability issues, said the challenge for Emanuel now is to “not simply replace the figurehead” with someone new who will fall short of expectations because needed structural changes are not implemented.

“It is critically important not to be distracted by this firing when the real challenge is addressing the fundamental issues that have created this crisis of confidence,” he said. “We can go from scandal to scandal and fire one leader and put in another, but if we fail to address the underlying issues, it will be the same script two years later.”