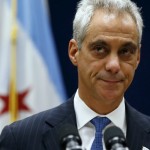 The Chicago Police Department is making 80 percent fewer investigative stops and confiscating fewer guns, DNA Info reports, despite the fact that murders and shootings have gone up this year.

At the same time, there have been 72 more shootings—a 218 percent increase—and 10 more murders than there were over the same time period in 2015.

Mayor Rahm Emanuel said in 2015 that officers had become “fetal” over fear that they would end up in newspapers or charged with a crime. Read more at DNAinfo Chicago.