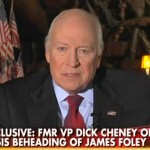 “Every day we find new evidence that he’d rather be on the golf course than he would be dealing with a crisis that’s developing rapidly in the Middle East,” Cheney declared during an interview with Fox News host Sean Hannity.

Earlier in the day, Obama took a break from his vacation in Martha’s Vineyard to give an angry and emotional speech condemning the jihadist group ISIS and praising Foley’s career as a photojournalist. Among other things, Obama called ISIS a “cancer” in the world. According to a White House pool report, Obama then went to Farm Neck Golf Club with former Miami Heat player Alonzo Mourning and others.

Cheney, a Republican and one of Obama’s fiercest critics, said Obama should have instead decided to end his vacation and engage the situation.

“I noticed the reaction of David Cameron, the British prime minister, when he found out that the individual who apparently did the beheading was speaking with a British accent. He wanted to immediately leave his vacation,” Cheney said. “Of course, our president headed to the golf course as soon as he made his relatively, I thought, ineffective statement.”