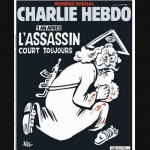 To mark the one-year anniversary of the terror attack on its offices, French satirical weekly Charlie Hebdo released a special edition cover today featuring a figure with a Kalashnikov slung over his shoulder. The words “One year on: The assassin is still out there” caption the drawing.

One million copies of the edition will be on European newsstands this week, with thousands more expected to be sent overseas.

Al Qaeda’s branch in the Arabian Peninsula claimed responsibility for the 2015 attack, in which Chérif and Saïd Kouachi entered the weekly publication’s Paris office and killed 12 people. The brothers were shot dead by police several days later during a shootout. Read more at The Guardian.