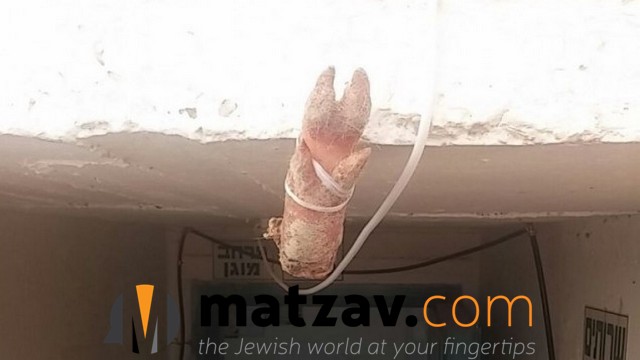 Mispallelim in the southern city of Arad on Wednesday were shocked to find a severed pig’s foot hanging near the entrance to a new shul inaugurated in the city, accusing the mayor of fomenting hatred that led to the vandalism.

The shul has been the subject of a lengthy legal battle. Ger claims the property belonged to the chassidus while the municipality claims it owned the structure.

The court eventually ruled in favor of Ger.

Community leaders said that placing the pig’s foot above the shul’s door was “a new low” in the “inciters’ fight against the chareidi public.”

The former development town, on the edge of the Negev desert, has seen tensions in recent years.

According to Army Radio, Gerer chassidim accused the city’s mayor, Nissan Ben-Hamo, of “continuous incitement” that led to the act.

The municipality said that Ben-Hamo condemned the act in a city hall meeting and that all details were transferred to the police.

“The fight and the battle by the mayor against the chareidi public is the reason for the grim atmosphere in the city and the pig’s foot is one of the results,” Gerer community leaders wrote in a letter to Ben-Hamo.

Yehuda Ashkenazi, a municipality spokesman, said that all claims were entirely baseless.

“The municipality has nothing to do with this. Yesterday a city hall meeting was held and the mayor condemned the act. The mayor asked the chief of the local police station to investigate and find the offenders, in the hope that they will be prosecuted.”