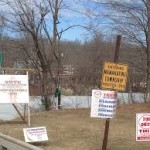 The Times Herald Record reports: Monticello – Village of Bloomingburg resident Anita Hoppe was busy Wednesday filing 190 voter registration challenges. This was in addition to the 32 challenges already filed with the Sullivan County Board of Elections by Town of Bethel resident Rabbi Joseph Kolakowski, a supporter of developer Shalom Lamm. Elections Commissioners Ann Prusinski and Rodney Gaebel said it was allowed.

Bloomingburg residents are scheduled to vote on a referendum to dissolve the village into the Town of Mamakating Sept. 30. It comes in the midst of rampant opposition to a 396-home frum development being built by Lamm.

Hoppe was joined by Holly Roche, president of the village’s Rural Community Coalition, as they both have been opponents of Lamm’s development and proponents of the dissolution.

The vote is shaping up to be as nasty as the March mayoral election in this eastern Sullivan County village – an election settled in court because of more than 100 voter challenges.

Both Prusinski and Gaebel predicted the vote on Sept. 30 could end the same way. The village has 362 registered voters.

Hoppe said the voters being challenged by her claim to live in various parts of the village, not just on Main Street.

Michael Fragin, a spokesman for Lamm, questioned the timing of the filing. Fragin said it could be difficult for some residents to respond in a timely manner since Rosh Hashanah began on Wednesday and ended Friday.

“I think the discrimination – I don’t want to speculate someone’s motivations,” Fragin said. “I would hope the Board of Elections, hypothetically of course, (realizes) that there are people observing a holiday.”

Gaebel said voters who were challenged will be notified by mail and given a questionnaire they must return within 10 days.

Prusinski said no one will be denied the right to vote and a decision on the challenges will be made after the vote. Residents can challenge the decision in court.

Prusinski said a third party – the county sheriff’s department – will investigate the legitimacy of a voter’s residency.