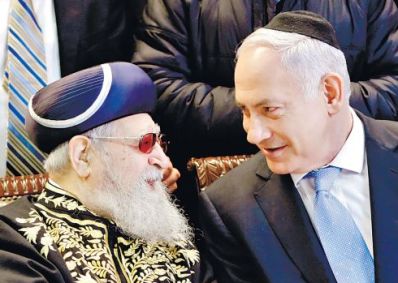 The prime minister was accompanied by his wife Sarah.

During his nichum aveilim visit, an uncomfortable atmosphere pervaded when Chacham Ovadiah’s sons expressed that their father’s “dying wish” was for the Israeli government to cancel plans to draft chareidi bochurim into the IDF.

Chacham Ovadiah’s sons told Netanyahu that their father was “very hurt” that the premier had not given him “an answer” on the draft plans.

“I lost a son, but this hurt me more,” they quoted Chacham Ovadiah as having said. “Over and over, in his last months,” they said, Chacham Ovadiah returned to the issue and it was his “dying wish” that the plans be annulled.

“Our father was hurt, but his physical pain was less than the pain he experienced due to the government’s attacks on the Torah world,” one of the aveilim said.

“Cancel the decree,” said one son.

Netanyahu told them, “We are trying to unify the people. I am looking for a path to protect the Torah world.”