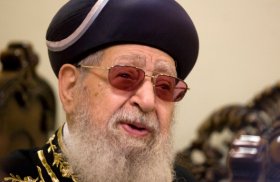 There has been a significant downturn in the condition of Rav Chaim Ovadia Yosef ben Georgia, who is in the intensive care unit of Hadassah Ein Kerem Medical Center in very serious and unstable condition this morning, according to doctors. He is on life support and in need of rachamei Shomayim as he fights for his life.

Thousands of children are set to gather at noon at the Kosel for a massive gathering of tefillah for Chacham Ovadiah. Yidden all over the globe are being urged to engage in tefillah.

Hadassah spokeswoman Racheli Goldblatt said this morning, “During the night, the condition of Rav Chaim Ovadiah Yosef worsened and is now defined as very serious and unstable. A team of doctors attending to the rav during the night added drugs to support his vital body’s functions.”

Dr. Dan Gilon, the cardiac expert overseeing Chacham Ovadiah’s care, said this morning, “The sakanah to the rav is genuine, clear and defined. The sakanah is greater than he’s faced any time recently, including the difficult times of a week or two ago. In the coming day we’ll know how immediate the danger to his life is.”

This morning, doctors inserted a breathing tube into Chacham Ovadiah’s throat, and after the deterioration of his condition, they have discussed whether to do surgery.

During the last week, until yesterday, there was a gradual improvement in the condition of Chacham Ovadiah. He had been breathing on his own and returned to full consciousness. His family, who visited him, reported hand and eye movements and reactions on his part.

Yesterday’s blood tests revealed an infection and Rav Ovadiah has been place on a respirator and an induced coma.

All are asked to keep davening for Rav Chaim Ovadia Yosef ben Georgia.