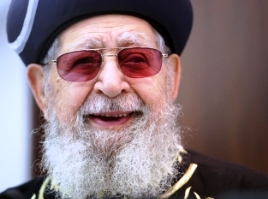 After several days of gradual awakening, Chacham Ovadiah Yosef fully awoke today, to the great relief of his family and doctors at Hadaasah Ein Kerem Medical Center in Yerushalayim.

Dr. Dan Gilon, head of the cardiac unit at Hadassah who is overseeing the medical care of Chacham Ovadiah, said, “The rav is still in a state of sakanah, but the danger has lessened and we anticipate further improvement in the coming days.”

As reported earlier here, a few days ago, the doctors at Hadassah began reducing the anesthetic being injected into Chacham Ovadiah, who gradually regained his ability to recognize his surroundings. Because of equipment attached the Chacham Ovadiah to assist his breathing, he has not yet formally spoken, though some reports in the Israeli chareidi media stated that he moved his lips in an attempt to recite Shema today.

Dr. Gilon spoke on radio, stating that Chacham Ovadiah is responding to the people around him and that doctors are hoping there will be no negative repercussions from all that Chacham Ovadiah has endured medically in his treatment over the last week. Recovery, he said, could be very slow, but because there have been important elements of improvement – such as his ability to recognize those around him – there is room for optimism as time passes.
At this point, the doctors are taking it day by day, hour by hour, monitoring the rav around the clock.

All are asked to stay engaged in tefillah for the recovery of Rav Chaim Ovadiah Yosef ben Georgia.