Sternie Super never thought moving to Sub-Saharan Africa was very realistic. Sure, she had dreamed of establishing a Chabad-Lubavitch outpost together with her husband, Rabbi Avromy Super, and moving to some place, near or far, to service the area’s Jewish population. But Nairobi, Kenya? That seemed like a pipe dream for the Iowa native—perhaps a bit too far, a little too exotic.

Until she got there.

Just before Pesach, Super and her husband traveled to Nairobi to spend the holiday with the city’s Jewish community. The 112-year-old Nairobi Hebrew Congregation had reached out to co-director of Chabad of Central Africa Rabbi Shlomo Bentolila asking for assistance in finding a rabbi, and Bentolila had connected them with the Supers. After the community had the chance to meet the couple in person over Passover, where the Supers ran a seder for 50 people, the match was made.

The visit sealed the deal for the couple as well, particularly for Sternie (née Brook). Like so many other foreigners who initially come to Kenya for just a short time, she discovered Nairobi to be prettier than she had thought—and more Western, too. Come High Holiday time this year, Rabbi Avromy and Sternie Super will be leading the Nairobi Hebrew Congregation and establishing the first Chabad center in East Africa, Chabad-Lubavitch of Kenya, under the auspices of Chabad of Central Africa.

“Once I got here, I realized that it was an actual option,” says Sternie. She was particularly surprised by the amount of Jewish children involved in the community. “The first thing I’m planning to work on is creating a vibrant Hebrew school.”

The move might not have occurred had it not been for Rabbi Super’s previous experiences in Africa. As a rabbinical student, he spent nearly sixmonths at the Chabad yeshivah hosted at Bentolila’s Jewish center in Kinshasa, the Congo. Kinshasa has become the capital for all things Jewish throughout most of this vast continent since Bentolila’s arrival in the Congo 25 years ago, and he regularly sends rabbinical students, Jewish materials and holiday aid to its disparate Jewish communities. During his first stint in Africa, Super spent Chanukah in Accra, Ghana; other young rabbis were sent to, among other countries, Ethiopia, Namibia and Zambia. 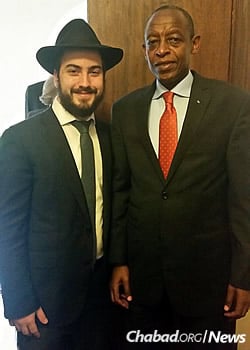 The rabbi with Rwanda’s ambassador to Kenya, James Kimonyo

In all, Chabad of Central Africa reaches 17 countries.

The Chabad center in Kenya will be the fifth permanent Chabad presence in Sub-Saharan Africa, excluding South Africa. Aside from Bentolila in Kinshasa, who first arrived in 1991, there are now centers in Abuja, Nigeria; Accra, Ghana; and Luanda, Angola.

“In Nairobi, this is a union between Chabad and the community,” says Bentolila. “The Supers will work within the community and at the same time direct Chabad of Kenya.”

“I loved Africa from the first time that I got there,” Rabbi Super says of his initial enthusiasm for the idea. “In other parts of the world, you might have rabbis chasing after Jews trying to convince them to come to an event. What I’ve found in Africa is that people are looking to connect with their heritage; they call you. To me, that’s incredible.” 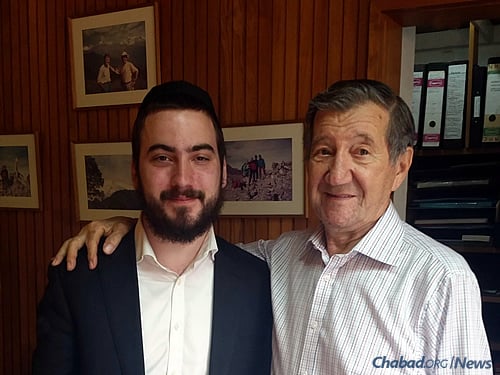 Super poses with Charles Szlapak, originally from Poland but in Nairobi since 1938, who has served as a central pillar of the community for decades.
Nairobi’s Jewish community goes back to the late 1800s. Many Kenyan Jews arrived there fleeing European anti-Semitism in the years before World War II.

Of Locals and Expats

The first Jews arrived in Kenya at the turn of the 20th century, and shortly afterwards, the Nairobi Hebrew Congregation was formed. Although theirnumbers never ballooned to anything substantial, Jews did play pivotal roles in Kenyan society—both before and after independence in 1963—and Jewish life has remained stable throughout.

The 40th anniversary of Israel’s successful and miraculous rescue operation in Entebbe, Uganda, has also revived memories of the crucial role played by Kenya during the affair. At the time, Israel’s planes were unable to make the roundtrip flight to Uganda without a refueling stop. President Jomo Kenyatta approved Israel’s request to do so, but not without serious repercussions; Ugandan dictator Idi Amin directed reprisals against Kenyan citizens and had Kenya’s Minister of Agriculture Bruce Mackenzie assassinated (Mackenzie helped convince Kenyatta to agree to Israel’s request.) Suspicions that influential Jews in Kenyan society played a role as well, in particular the hotel-owning Block family, led to the 1980 Palestinian terrorist bombing of the Block-owned Norfolk Hotel in Nairobi. 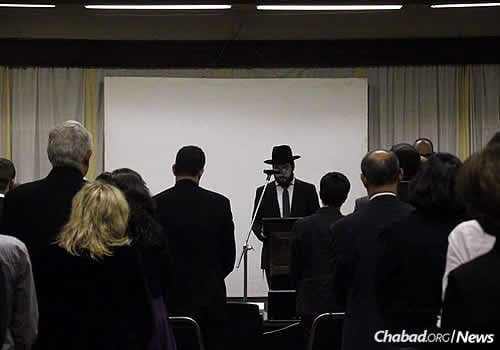 Rabbi Super speaks at a Holocaust memorial held at the Nairobi Jewish community’s Vermont Hall, which sits within the Nairobi Hebrew Congregation’s complex.

Although its Jewish history is old and ingrained, the majority of Kenya’s Jews today are expatriates from Israel (which has been involved in building Kenya’s infrastructure for decades), the United Kingdom, South Africa and the United States. Many work for the United Nations or international NGOs.

Ashley Myers is president of the Nairobi Hebrew Congregation. A British native, he first came to Kenya 13 years ago to manage a popular beach hotel in the coastal city of Mombasa. For the last five years, he’s lived in Nairobi, where he’s taken an active role in the city’s Jewish communal life. He notes that Kenya has long had a fruitful relationship with Bentolila, and after the community parted ways with its previous rabbi (who filled a 17-year gap in permanent rabbis), it felt natural to turn to Chabad of Central Africa in their search for a new rabbi.

“We’ve had a relationship with Chabad in Africa for a very long time,” says Myers. “We always got rabbinical students for Jewish holidays, but never someone full-time. We were looking for someone who could fulfill both the religious side, but more importantly, someone who could work to draw Jews together of all backgrounds. There’s a wide range of Jews here in Nairobi, and we wanted someone who could bring us together.”

When the Supers visited, affirms Myers, the community was impressed. “They have English and Hebrew language; they’re young and enthusiastic. They fit our requirements exactly.” 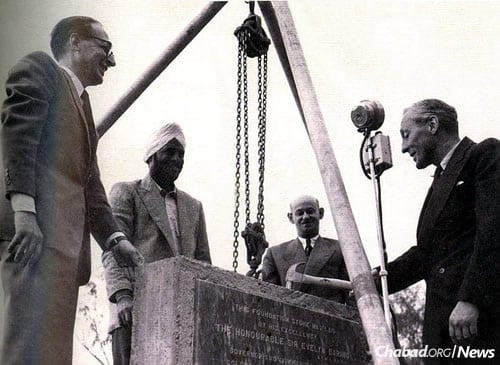 Yaniv Gelnik has lived in Nairobi for the last two years. An Israeli native whose parents are originally American, he and his family initially planned on staying in Kenya for one year. But when the year was up, they didn’t want to leave.

“We realized that this is where we wanted to live,” says Gelnik. “We have a great community of friends. It’s super diverse, and everyone here is doing interesting work. No one is just an accountant or just a lawyer; they’re accountants and lawyers working on interesting projects. For our kids, it’s amazing here, too. The nature is incomparable. There are giraffes and zebras half an hour away from our house; where are you going to get that?”

Gelnik sees the Supers’ impending arrival in Nairobi as a boon for the city’s Jewish life and looks forward to becoming increasingly involved. “We felt very reassured after meeting them,” he says. “They have this nonjudgmental approach to helping the community grow, and a progressive attitude towards sharing and educating, keeping it a happy experience. People are psyched.” 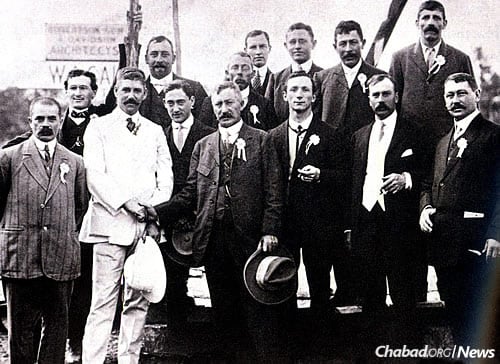 Years in the Making

Africa is vast. Its history and development—and in turn, that of each distinct Jewish community—are complicated. So if it appears as if the continent is home to a growing and interconnected network of Jewish communities, it’s mostly due to Bentolila’s early and consistent groundwork.

“One factor pulling everything together is Rabbi Bentolila,” attests Myers.

“That’s a result of a lot of work and effort he’s put in. We’re conscious of that fact that we’re part of a larger group, but we’re just seeing the beginnings of that. His support is what’s brought us to the stage we’re at now.”

Bentolila himself first came to Africa in the mid-1980s as a “Roving Rabbi,” a program of Merkos L’Inyonei Chinuch, the educational arm of the Chabad-Lubavitch movement. It was then that he first visited Kenya, among other African nations, and after arriving in Kinshasa permanently with his wife,Miriam, the relationship continued.

“We always had a close connection,” says Bentolila. “But what you’re seeing now, this expansion, it is 25 years of work. You nurture relationships, and at the end, it looks like one big family.”