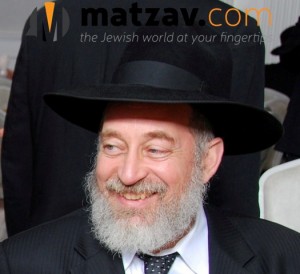 For the past 30 years, Rabbi Shlomo Chaim Kanarek has embodied the meaning of the word achrayus. Time and time again, he has accepted the responsibility to fill a need by founding mosdos hachinuch for the children of Lakewood, and then operating these mosdos with the highest standards of Torah and mesorah.   To date, Rabbi Kanarek sits at the helm of a chinuch dynasty numbering six mosdos of chinuch habanim v’habanos.

Another remarkable individual who shares Rabbi Kanarek’s dedication and enthusiasm to accept the achrayus of the frum community is the renowned Tomech Torah and askan, Shlomo Yehuda Rechnitz of Los Angeles. Shlomo Yehuda is a yedid neeman and the most magnanimous supporter of hundreds of Torah and chessed institutions worldwide. He shares a very special, close personal relationship with Rabbi Kanarek and the mosdos under his auspices.

Indeed, the names of these two exceptional men have become synonymous with the concepts of achrayus for the klal, and dedication to the chinuch of yiddishe children.

Rabbi Kanarek’s amazing work on behalf of the klal began over 30 years ago.

In 1985, the growth of Lakewood as a Torah community had already begun. At that time only one girls’ elementary school existed in Lakewood. Rabbi Kanarek recognized how the exponential growth of the city would come with new challenges of providing quality chinuch for every child in Lakewood and realized  the need to open new mosdos for this purpose. 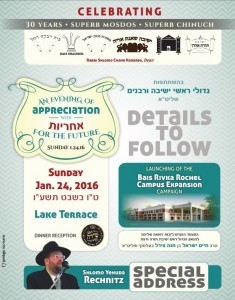 Since then, Rabbi Kanarek has continued his pattern of taking the impetus of accepting responsibility for the klal again and again, by opening a girls’ high school, three boys’ elementary schools, and most recently, yet another girls’ elementary school. He has seen tremendous success and siyata d’shmaya in all his undertakings, as all of his schools have earned a name as some of Lakewood’s premier mosdos of chinuch.

The first boys’ school opened by Rabbi Kanarek, Yeshiva Toras Aron, opened its doors in 2005 to fill a desperate need in the Lakewood community for an additional school. Beginning with two parallel classes the first year, and growing to three and four parallels, in rapid succession, toalling an enrollment of over 1,000 talmidim, YTA quickly earned itself a reputation as one of Lakewood’s foremost mosdos.

Even with the growth of YTA, the need for yet another mosad hachinuch for boys in Lakewood was inevitable. Rabbi Kanarek once again answered the call, and in 2007 Yeshiva Shaagas Aryeh opened its doors. YSA also has distinguished itself as a top rated school with the highest standard of excellence for its over 500 students.

Yeshiva Bais Hatorah was founded in 1998 with a distinctive style of learning that includes a mastery of the entire Chumash by the end of 4th grade as well as Mishnayos Seder Moed and most of Kodshim in 5th at which point conventional Gemara takes over. When this unique mosad hachinuch was hit with severe financial troubles in 2011 which threatened to close the yeshiva, Rabbi Kanarek again took the initiative. He took the reins of the entire mossad and brought it stability, which ushered in a new era of growth and achievement.

As the students began graduating from Bais Rivka Rochel, the need arose for a new Bais Yakov high school with the same high caliber level of education. Rabbi Kanarek established Bais Shaindel for this purpose. Since then, Bais Shaindel has become an example of superb education for the daughters of many Lakewood families, truly preparing them for their future lives as wives and mothers as well as giving them the necessary skills to work in the outside world.

Just two years ago, when the need arose for another girls’ elementary school, Rabbi Kanarek again rose to the challenge and founded Mesoras Bnos Yisroel. In its short existence, this mossad has earned a name for excellence in educating every individual girl and helping each one achieve success in her studies and growth in ruchnius.

Shlomo Yehuda Rechnitz is renowned for the tremendous Kidush Hashem he makes at every opportunity. He consistently is mechadesh innovative new ways of performing acts of tremendous chesed and helping scores of Yidden. Not sufficing with donating multi-millions of dollars to Torah causes, he is personally involved in many institutions, organizations and program, giving all his kochos knowledge and resources to help the klal and untold numbers of people in all kinds of situations.

The ihr haTorah of Lakewood has also been zocheh to be the beneficiary of Shlomo Yehuda’s huge heart and concern for Klal Yisroel. One area Shlomo Yehuda has been extremely active in is ensuring that every child finds a place within the Lakewood school system. He is well in-tune with the problem of finding the right placement for every child in the burgeoning town of Lakewood, and feels the pain of every parent and child who are left without a school to attend as the school year approaches. Whenever such problems arise, he characteristically responds swiftly and decisively to address the issues at hand, using any and every means at his disposal and leaving no stone unturned in guaranteeing every child a slot in school.

On Sunday, a mass Evening of Appreciation will be held in Lakewood to celebrate 30 years since Rav Kanarek opened his first mossad hachinuch in Lakewood and began the establishment of his empire of Torah education.

Shlomo Yehuda will be traveling in from Los Angeles to deliver a Special Address to the gathering.

The event, which will take place in Lake Terrace Hall, will feature participation and speeches from Gedolei Roshei Yeshiva, Rabbanim and some of Klal Yisroel’s leading mechanchim. It will also mark the launching of the Campus Expansion Campaign for Bnos Rivkah Rochel.

The momentous occasion is expected to draw a huge crowd of people, eager to take this unique opportunity to express their appreciation to Rabbi Kanarek and Shlomo Yehuda Rechnitz and be part of this tremendous maamed of celebration, appreciation and chizuk.