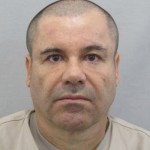 Mexican President Enrique Peña Nieto announced Friday that notorious cartel boss Joaquín Guzmán Loera—best known as “El Chapo”—has been captured. Loera had been on the run since July 2015, when he escaped from a state prison. “Mission accomplished,” Nieto tweeted.

El Chapo is the head of Mexico’s largest drug-trafficking gang, the Sinaloa cartel. His previous arrest occurred February 22, 2014, when an elite Mexican Marine squad nabbed him at a condominium complex in Mazatlán. He was brought to Altiplano, Mexico’s most fortified prison. The drug lord’s stay was relatively brief, however, as he escaped Hollywood-style 15 months later.

Surveillance footage from the prison purported to show his monitoring agents with their computer screens briefly turned off, some of them playing games on their cell phones. It allegedly took officials 18 minutes to realize El Chapo had escaped through a tunnel dug in a corner of his prison cell. (Daily Beast)

The Mexican Navy says they found two armored vehicles, eight rifles, a handgun, and a rocket launcher at El Chapo’s Sinaloa home. Five assailants were killed and six people were arrested in the raid on the home.