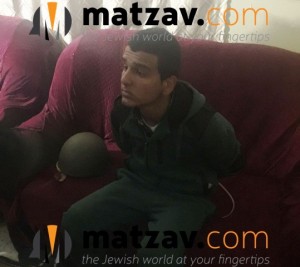 [VIDEO AND MULTIPLE UPDATES BELOW] BREAKING, 7:16 a.m. IL: The IDF, Israeli Police and the Israel Security Agency have arrested the terrorist responsible for brutal attack in Otniel. A 16-year-old Palestinian terrorist was taken into custody for the murder of Dafna Mayer Hy”d, 38, in front of her children, Matzav.com has learned.

Dafna was a mother to six children, two of them foster children, and the wife of Natan.

The operational assumption before the arrest was that the terrorist escaped from Otniel immediately after committing the murder on Sunday and that he was hiding out in one of the Palestinian villages nearby in the area of Har Chevron.

The IDF is still investigating how the terrorist managed to penetrate the town without the military monitor that works 24/7 catching him. It seemed likely the terrorist was a Palestinian worker who possessed proper documentation to enter the town. The name of the suspect has not yet been released.

UPDATE, 7:25 A.M. IL: The suspect is Morad Bader Abdullah Adais, 16, believed to be a construction laborer who worked in Otniel.

Renana, Dafna’s 17-year-old daughter, had described the horrifying event details to a close family friend, as reported by Arutz Sheva: “I saw the terrorist stab my mother and my mother struggled with all her might so he would not come into the house and hurt us.”

“At one point, the knife got stuck and the terrorist could not get it. Our eyes met. He looked at me, and I at him. He kept trying to pull out the knife and it was clear to me he wanted to come and hurt me too.”

A family friend added: “Renana was screaming at the terrorist and when he failed to retrieve the stuck knife, he ran away. She continued screaming and saw him running away toward the exit path from the town.”

UPDATE, 7:43 a.m. IL: Adais did not possess a permit allowing him to work in Otniel, despite early assessments to the contrary. He was arrested by soldiers from the elite Duvdevan unit in the village of Beit Amra, some three kilometers from the scene of the attack. He has reportedly confessed to carrying out the attack.

VIDEO OF THE CAPTURE