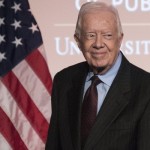 The Carter Center announced that 22 cases of Guinea worm were reported last year, a sharp drop from the 126 cases reported in 2014.

Jimmy Carter said in 1986 that he would make it his mission to eradicate Guinea worm, which had infected 3.5 million people. Since then, the center’s has worked to educating villagers about filtering and chemically treating water.

If Guinea worm is eradicated, it will be only the second human disease after smallpox to have ever been wiped out. Read more at The New York Times.