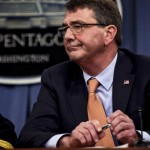 Defense Secretary Ashton B. Carter on Saturday said that a U.S. airstrike was likely responsible for the deaths of Iraqi soldiers. Early reports indicate the deaths of nine or 10 people.

The incident, he said, appeared to be “a mistake that involved both sides.” Carter’s comments come after reports on Friday that Iraqi soldiers had been killed by fire from U.S. planes.

The U.S.-led coalition has launched an investigation into the incident, the first reported instance of friendly fire since the U.S. began bombing Islamic State targets in Iraq last year. Read more at The Washington Post.