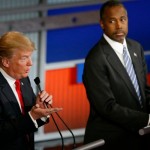 Republican presidential frontrunners Ben Carson and Donald Trump have both issued harsh words about protests erupting at the University of Missouri over the administration’s response to racially charged incidents on campus.

Appearing Thursday morning on the Fox Business Network, Trump said the demonstrations are “disgusting,” especially after the resignation of “weak, ineffective” campus officials, whom he believes caved to the “crazy” student demands. “Trump should have been the chancellor of that university,” he said. “Believe me, there would have been no resignations.”

Carson told Fox News late Wednesday that “we’re being a little bit too tolerant, I guess you might say, accepting infantile behavior.” He added: “To say that I have the right to violate your civil rights because you’re offending me is un-American. It is unconstitutional,” referring to the communications professor who infamously requested “muscle” to block reporters from accessing protests. Read more at Politico.