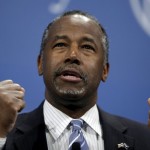 Republican presidential candidate Ben Carson suspended his campaign Tuesday after three volunteers and a campaign employee were injured in a car accident in Iowa, Gideon Resnick reports for the Daily Beast.

According to the campaign, three passengers are being treated at a local hospital, while one of the volunteers has been transported to a trauma center in Omaha, Nebraska, for much more serious injuries. Carson will travel to Omaha to join the family of the volunteer being transported there.

“Recognizing speculation can run rampant at times like these, fortunately we have a leader in Dr. Carson who has dealt with life and death challenges his entire career,” communications director Larry Ross told The Daily Beast.