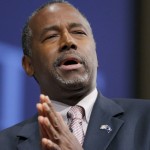 Ben Carson believes ISIS is a greater threat than al Qaeda was in the early ’00s because flying planes into towers did not require “sophistication.”

According to ABC News correspondent Katherine Faulders, who reports on the retired neurosurgeon’s campaign, “Carson tells me ISIS more of a threat now that al Qaeda was in 2001 and 2003. Said flying planes into towers didn’t require sophistication.”

The 9/11 attacks, which killed nearly 3,000 people, were a coordinated effort by al Qaeda to fly four passenger airlines into major population areas, requiring several years of planning and training.

According to Washington Post reporter Philip Rucker, who was also present, Carson said of Syrian refugees: “If there’s a rabid dog running around in your neighborhood, you’re probably not going to assume something good about that dog, and you’re probably gonna put your children out of the way.” He added: “Doesn’t mean that you hate all dogs by any stretch of the imagination.” Read more at Politico.