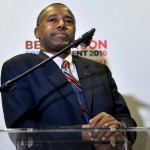 The retired neurosurgeon met with refugees at the Zaatari camp over the Thanksgiving weekend and told CNN that “their intense desire is to return to their country and be repatriated.”

Carson added that refugees would be “satisfied” to remain in the camps if they were “adequately funded.”

The 64-year-old argued the U.S. could help more by boosting funding for refugee camps, but maintained that refugees shouldn’t come to the United States. Carson also pushed back on criticism over his remarks for comparing Syrian refugees with “rabid dogs,” telling NBC’s Meet the Press it was “only the news media” in the U.S. that misinterpreted his comments. Read more at The Guardian.