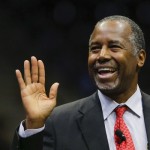 According to Ben Carson, several House Republicans reached out to him in 2014 about possibly replacing John Boehner as Speaker of the House.

He concluded: “I was very flattered that there were several members that thought I’d fit the bill very well, but I think it played out correctly the way that it did.”

A separate source confirmed that “several” Republicans did, indeed, reach out to the retired neurosurgeon. Read more at The Hill.