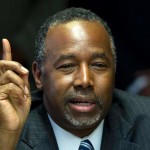 Ben Carson says the investigation and rumors into President Obama’s birth certificate are “not even close” to the media scrutiny that his GOP presidential campaign has faced.

“I have not seen that with anyone else,” Carson said in an interview broadcast on NBC’s “Meet the Press” on Sunday. “If you can show me where that’s happened with someone else, I will take that statement back.”

He then dismissed notions that Obama or President Bill Clinton faced comparable vetting in their respective campaigns.

Carson said the “biased media” are trying to take him down because he poses a “threat” to the “secular progressive movement.”

“I’m a very big threat because you know they can look at the polling data, they can tell that I’m the candidate who’s most likely to beat Hillary Clinton,” he said. “They see that and they worry.”

The retired neurosurgeon attributed a $3.5 million surge in donations last week on recent reports in the media calling into question the veracity of his biography.

“The people are seeing through exactly what’s going on, and they’re getting fired up,” Carson said. “It’s almost an us versus them thing.”

Journalists have been unable to substantiate several of Carson’s claims, such as that he attempted to stab someone when he was 14 and that he was offered a full scholarship to West Point.