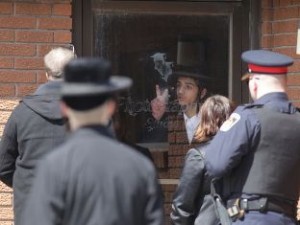 [Update below.] Immigration officials raided the settlement of runaway sect Lev Tahor today and made arrests.

Reports from the Lev Tahor community north of Chatham, Ont., indicate more than a dozen Canadian Border Services Agency officials arrived at the community this afternoon and took people into custody.

The controversial group, known for its extreme religious views and for dressing like frum Jews, landed in a tiny enclave north of Chatham in November after fleeing Quebec, fearing their children were to be taken into temporary foster care over allegations of abuse and neglect Nothing but controversy has followed them since.

This afternoon, several Lev Tahor man was seen being driven away in handcuffs.

Update: Seven members of Lev Tahor were arrested over immigration issues. The seven have a combined 28 children. Children whose parents are both in custody are now in the care of the children’s services.

Eight Lev Tahor children were detained last month after leaving Canada with their families before a scheduled hearing. Six were stopped at Trinidad and Tobago trying to head to Guatemala and two others were found in Calgary.