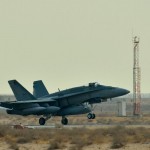 One day after defeating the conservative government and winning the prime minister post, Justin Trudeau informed President Obama that he intends to withdrawn the Royal Canadian Air Force’s fighter jets from Syria and Iraq.

During a Tuesday press conference, Trudeau said that while Canada remains “a strong member of the coalition against ISIL,” he must follow through on his campaign promises to draw down combat missions in the region.

However, the Liberal Party leader fully intends to keep military trainers in Syria. Read more at The Australian.