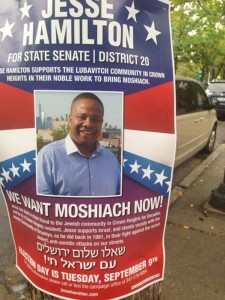 In a great ‘know your audience’ moment, an African-American political candidate who ran – and won – in the New York State Senate primaries on Tuesday published a poster calling for the arrival of Moshiach.

“We want Moshiach now!” read the banner, which appeared in the Crown Heights neighborhood of Brooklyn and was targeting Chabad Lubavitch Jews who dominate the community.

“Jesse Hamilton supports the Lubavitch community in Crown Heights in their noble work to bring Moshiach,” the banner explains.