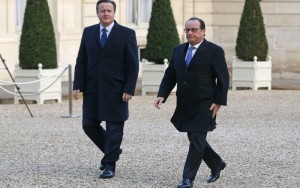 British Prime Minister David Cameron said Monday he would ask for parliamentary approval this week to begin participating in U.S.-led airstrikes on ISIS in Syria.

Speaking in Paris after meeting with French President François Hollande, Cameron called for more intelligence sharing across the European Union and welcomed the use of the British air base in Cyprus in the battle against the self-proclaimed Islamic State.

The two leaders reportedly agreed to ramp up counterterrorism efforts in the wake of the attacks on Paris. Hollande and Cameron also paid tribute to victims at the Bataclan concert, where gunmen opened fire and killed 89 of the 130 lost in the Nov. 13 attacks. Read more.