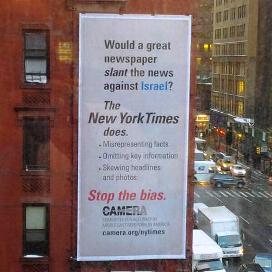 A new billboard adjacent to the New York Times office in midtown Manhattan calls out the newspaper for what a media watchdog group says is anti-Israel bias in its reporting.

The billboard, an initiative of the Committee for Accuracy in Middle East Reporting in America (CAMERA), states: “Would a great newspaper slant the news against Israel? The New York Times does.” The billboard-which accuses the newspaper of “misrepresenting facts,” “omitting key information,” and “skewing headlines and photos”-ends with a call to “stop the bias.”

CAMERA Executive Director Andrea Levin said the decision to place the billboard comes after years of the New York Times misleading readers and policymakers on the challenges that Israel faces in the Middle East.

“There’s a chronic bias embedded in the reporting and commentary,” Levin said in a statement. “The public should be very skeptical about relying on the Times. Our advice is to go elsewhere for solid news.”

Last November, the Times admitted it made “a regrettable choice” by featuring a photo of relatives of Hussein Jawadra, the Palestinian terrorist indicted for killing 19-year-old Israeli soldier Eden Atias, in its coverage on that murder.