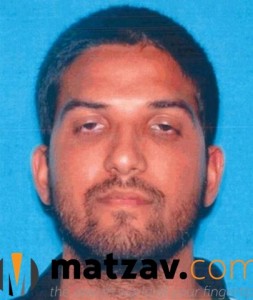 Early Wednesday morning, Syed Rizwan Farook asked his mother for the sort of favor grandmothers love to grant: A few hours of baby-sitting. Farook told her that he and his wife, Tashfeen, had a doctor’s appointment and didn’t want to take their 6-month-old daughter.

In an account of the conversation provided by a relative through a local Islamic leader, the grandmother agreed. She was caring for the child at the couple’s Redlands home when news of a mass shooting in nearby San Bernardino broke.

Fearing her son and daughter-in-law were victims, “she started calling. No answer,” said Hussam Ayloush, executive director of the Council on American-Islamic Relations’ Los Angeles office. It was only after reporters started phoning her that she realized the couple were the assailants.

That Farook’s own mother had apparently sensed nothing wrong underscored a feeling among investigators and acquaintances Thursday that the couple responsible for the massacre at a holiday party inside the Inland Regional Center scrupulously concealed their views, plans and a cache of weapons and explosives.

Of particular interest to investigators is the relationship between Farook, a 28-year-old U.S. citizen of Pakistani descent, and Tashfeen Malik, 27, a Pakistani national. While his upbringing and adult life in Riverside is chronicled in school files, work documents and other records, little is known publicly about her.

Authorities said Thursday that she was more than just an accomplice. At one point as the couple attempted to elude police, Malik fired an assault rifle out the back window of their sport utility vehicle at pursuing officers.

Nizaam Ali, who worshipped with Farook at a San Bernardino mosque, said he had met Malik on a few occasions, but she wore a head scarf that obscured her face.

“If you asked me how she looked, I couldn’t tell you,” Ali said.

The couple met online a few years ago and married last year in Islam’s holy city of Mecca in Saudi Arabia, according to co-workers at the public health department and others who knew them. The Saudi Embassy in Washington confirmed that Farook spent nine days in the kingdom in summer 2014.

Authorities said that when he returned to the U.S. in July 2014, he brought Malik with him on a fiancee visa. After a background check by the FBI and the Department of Homeland Security, she was granted a conditional green card last summer.

The couple held a walima, a celebration after the wedding, at the Islamic Center of Riverside for people who couldn’t attend the Saudi ceremony. Ali said a few hundred people attended. The couple’s daughter was born in the spring and co-workers at the San Bernardino County Public Health Department, where Farook worked for five years as an inspector, said some of them had thrown him a baby shower.

The idea of a new mother helping carry out a mass murder perplexed many. Sen. Dianne Feinstein (D-Calif.), who had a classified FBI briefing on the shooting Thursday, said leaving an infant for a suicide mission was “not something a woman would easily do.”

“So it’s going to be very interesting for me to see what her background was, what level of animus she had, because she had to have a considerable level,” Feinstein said.

Meanwhile, acquaintances and colleagues of Farook were struggling to reconcile the soft-spoken man they knew with the masked rampage killer who shot up a room filled with co-workers.

At the Islamic Center of Riverside, where Farook had worshipped until about two years ago, mosque director Mustapha Kuko described him as quiet, private and devoted to Koran study.

“He knows that we believe that to take one life is to take all life. So for him to do the opposite of what we as Muslims believe … I don’t know,” Kuko said.

One victim, who worked in the same department as Farook, was also a member of the congregation, he said.

The victim’s husband reported she is in stable condition, he said.

Recently, Farook had worshipped at a San Bernardino mosque, Dar-Al-Uloom Al-Islamiyah of America. Farook was “a very nice person, very soft,” said Ali, a mosque regular. He said Farook had memorized the Koran, a rare accomplishment for even devout Muslims.

According to law enforcement, Farook traveled to Saudi Arabia in 2013 during the hajj, the pilgrimage to Mecca that all Muslims who are able should perform at least once in their lives.

Another congregant saw Farook at the mosque a few weeks ago. Gasser Shehata said Farook had hurt not just his victims, but his own child.

“She will grow up knowing what her parents did,” Shehata said.

Farook was born in Chicago, the son of Pakistani immigrants. The family subsequently moved to Riverside, where his father worked as a truck driver and his mother as a clerk at Kaiser Permanente.

He and his siblings attended public schools. Yearbooks from La Sierra High School in Riverside show a smiling Farook during his sophomore and junior years. He was a member of the school’s Muslim club.

His mother, Rafia, portrayed family life as chaotic and sometimes violent in divorce papers she filed in 2006 to end her marriage of 24 years. She recounted an occasion when one of her two sons — it is unclear which — had to defend her from his father.

Farook got a bachelor’s degree in environmental health from Cal State San Bernardino in 2010. His older brother, Syed Raheel, who also attended La Sierra, joined the Navy immediately after high school. He served from 2003 to 2007 and was awarded two medals for service in the “Global War on Terrorism.”

In a profile on an Indian matrimonial site, Imilap.com, a user identified as “farooksyed49” described himself as a 22-year-old Muslim living in Riverside and working as a county health inspector.

“Enjoy working on vintage and modern cars, read religious books, enjoy eating out sometimes travel and just hang out in back yard doing target practice with younger sister and friends,” the profile read.

In May, Farook and his family moved into the Redlands home where authorities said he and his wife stashed the weapons. Judy Miller, his landlord, described Farook as a model tenant.

“He appeared as a very gentle person,” said Miller, 73.

She saw no signs of weapons when she visited. After Wednesday’s shootings, Miller said she immediately handed over a copy of Farook’s lease to FBI agents.

“I interviewed a whole bunch of people,” she said. “And he was the one I chose.”