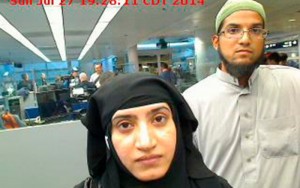 The San Bernardino shooters, Syed Farook and Tashfeen Malik, allegedly spent over a year planning their attack which killed 14 people, according to NBC News.

Counter-terrorism officials said that the couple practiced shooting at a gun range and made financial plans for Farook’s mother and the couple’s daughter.

There was a $28,500 deposit made in Farook’s bank account in the weeks before the attack, which investigators are examining, as Matzav previously reported. Read more at NBC News.