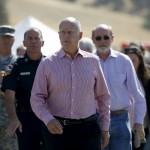 California Governor Jerry Brown has declared a state of emergency amid a continuing gas leak at Aliso Canyon that’s released about 85,000 tons of methane.

The governor also ordered a series of new regulations for all natural gas storage facilities in the state, which include conducting daily inspections of wellheads and drafting a risk management plan for safety threats.

The orders come as the Southern California Gas Co. grapples with a natural gas well leak that has released planet-warming methane for more than 10 weeks. The leak has led to the evacuation of hundreds of residents.

Scientists say methane pollutes at more than 80 times the rate of carbon dioxide over a 20-year period. Read more at the Los Angeles Times.