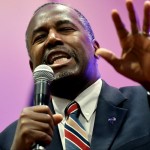 Ben Carson slid to a third-place tie in a Quinnipiac poll released Wednesday, after pulling to a virtual tie with Donald Trump last month.