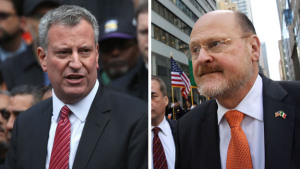 Mayoral candidates Bill de Blasio and Joe Lhota each hit the campaign trail today with several events around the city.

Despite being light-years ahead in the polls over Republican opponent Joe Lhota, the Democrat de Blasio has decided to take no chances.

He started the day Sunday at the Waldorf Astoria Hotel, 301 Park Ave., where he spoke to teachers. Afterward, he spoke at the First Corinthians Baptist Church, at 1912 Adam Clayton Powell Jr. Blvd. in Harlem, where he was joined by Harry Belafonte.

De Blasio also picked up the endorsement of the New York Daily News Sunday, but the newspaper expressed “worrying reservations” about him.

De Blasio has been hammering home his proposals to end stop-and-frisk, tax the rick for universal pre-kindergarten, and create 200,000 units of affordable housing.

De Blasio has urged supporters not to get complacent, despite his significant leads in the polls against Lhota. Read more at CBS NEW YORK.