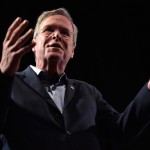 “Donald Trump, I don’t believe, is going to be the party’s nominee,” Bush told “Fox News Sunday.” “And if he is, he’s going to get crushed by Hillary Clinton. I wanted to point that out.”

Trump, the business mogul who is seen by many voters as a Washington outsider, has surged ahead of the establishment Republican candidates.

He leads the Republican field with 35 percent of support, according to the latest RealClearPolitics average of polls. Bush, at one point, was considered the front-runner, before tumbling from the top of the polls last summer. He now sits at sixth place among GOP candidates with 4.3 percent of support.

With the Iowa caucuses drawing near, the former Florida governor is turning to attack mode. He accused Trump of being a “strong supporter” of Clinton.

Trump “said some things that are just outrageous,” Bush said. “His views on policy have shifted with the winds. He is a strong supporter, until recently, of Hillary Clinton. And now he’s the front-running candidate for the Republican nomination.

“Someone has to call him out,” Bush added.