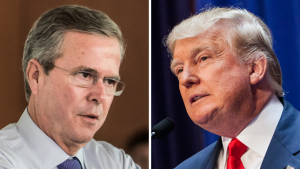 The defense is unusual coming from Bush, who has been harshly critical of Trump during the Republican presidential race, calling him the “chaos candidate” and saying he can’t “insult his way to the presidency.”
Still, even as he backed Trump in the fight against Clinton, Bush emphasized that he doesn’t support Trump’s proposal to temporarily ban most Muslims from entering the United States.

“This is how they play the game on the left,” Bush said. “They’re always blaming somebody. This case, I think, while I don’t agree with Trump’s idea, I don’t he has anything to do with being part of a recruiting video.”