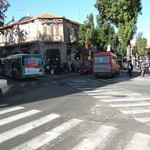 Yerushalayim – A bus in Kikar Shabbos in Yerushalayim full of frum people going to the Kosel was stoned tonight, as witnessed by a Matzav.com reporter.

There was apparently some type of demonstration going on, but it was not clear to me what it was about,” a passenger told our reporter. “A rock slammed through the bus, thrown by one of the demonstrators. Boruch Hashem no one was hurt, but there were many hysterical people on the bus, who were shaken up and were crying.

“I was going to the kosel to daven,” he told us. “Some people are afraid to go to the Kosel lately because of Arabs. Little did I know that I have to be afraid to be sitting on a bus in the middle of Geulah, packed with frum people going to the Kosel, because a hotheaded so-called ‘frum’ radical would throw a stone at a bus with men, women, children and little babies on it.”