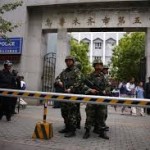 The 30,000 residents of Yumen, China are not allowed to leave the city after a man died of the bubonic plague last week. Not only has Yumen been sealed off from the rest of the country, but 151 people have been quarantined since last week.

The 38-year-old who passed away from the bubonic plague contracted it after being in contact with a dead marmot.

The bubonic plague killed tens of millions of people throughout Europe during the 14th century, so the level of public health concern is understandable. The CDC said modern antibiotics should effectively treat the disease, but they must be administered in a timely fashion. Read more at AFP.