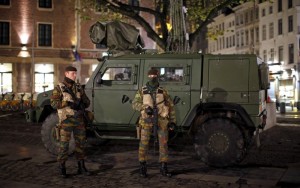 Brussels will remain under lockdown for at least another week, said Belgium’s prime minister Charles Michel during a Monday evening press conference.

The Belgian capital has been under tight security over fears of a serious terrorist attack. Under current rules, the city’s shops, schools, and offices shut down, with armed officials flooding the streets.

School closures and transit restrictions may be lifted Wednesday, Michel suggested, but the rest of the lockdown will remain as authorities hunt for the Brussels-originating Salah Abdeslam, who is suspected to have played a role in the terror attacks that left 130 dead in Paris. Read more at The Guardian.