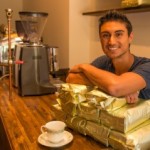 A Brooklyn coffee shop proprietor is in a bitter brew over calling Jews “greedy infiltrators,” who “function via greed and dominance,” apparently over neighborhood gentrification, on his business’s Instagram and Facebook pages, a neighborhood website noted on Thursday.

The Bushwick Coffee Shop owner, Michael Avila, who, may have missed his morning double latte caffeine wake-up fix on Wednesday, posted a rant against Jews on his Instagram account:

“Ok, what I REALLY want to talk about is how to consider the Jews (oh yes, let’s talk about it) who want a piece or all of Bushwick. My stubborn Bushwick-oroginal neighbor is a hoarder and a mess- true.. and he’s refused selling his building for lots and lots of money. His building and treatment of it makes the hood look much less attractive and I would like him to either clean up or move along. BUT NOT be bought out by Jews however, who in this case (and many cases separate- SORRY!) function via greed and dominance. A laymen’s terms version of a story would simply be- buying buildings, cutting apartments in half, calling them luxurious, and ricing them at double. Bushwick IS rising and progressing, and bettering, but us contributing or just appreciating this rise and over all positive change do not want to be lumped with greedy infiltrators. Two jewish young men with generally rude behavior (one more than the other) ordered coffee, and explained how they were looking for this neighbor of mine. I knew what was up and asked where are they visiting from. When asked where I’m from I firmly and confidently said ‘HERE. This is my neighborhood, it’s where I come from.’ They began to lighten up and almost kiss as a bit. I openly said ‘looking to buy the building?’ They said yes and I explained how this man has been asked to sell for large amounts of money many times- which is true. So I said ‘Good luck with that. But if you’re going to come here ya gotta be nice’. If you know me you’ll know what my eyes looked like. You know!- when they have the look of death within them. They one guy smiled. And they both knew where I stood. The one who had a slightly more aggressive behavior let that go fast after our initial meeting n which they experienced my confidence… and then at the end gave me his card and asked if I’d contact him when I see my neighbor. He said.. and I quote ‘I’ll treat you right’ Whatever exactly that meant. But I did say if you come here you have to be good. We’ll see what happens from here.”

In his defense, Avila told DNAinfo.com, that he was “misunderstood.”

“I’m anti-Zionism. It’s about politics, it’s about greed,” he said. “I’m certainly not anti-Semitic. That would stand against everything I believe I stand for.”

But then he went on to say, “I think there’s a difference between progression and greed … It really isn’t a race thing or a culture thing. But it tends to be the Jews [who are buying up properties in Bushwick].”

And – even including those incendiary quotes – he called the DNA account a “fair article,” on his Facebookpage.

And then, in an awesomely inept attempt to show how he really felt, he also posted a YouTube video on his Facebook page, entitled “Jews Against Zionism and Rothschilds.”

“I love LOVE these Jews These men have the right idea,” he wrote in the caption, since, when you hit the rock bottom of the coffee grounds, well, you keep digging – right?

By then local media and city news outlets sent the story into viral territory, and outlets like the Bushwick Daily, Gothamist and Gawker, piled on, and outraged (former) clientele started in on him:

Simon Mullin said: “You had a chance to apologize, but then you still complained about ‘The Jews’ in your defense (article cited above). You’ll never learn, homie. Your business is done, and you’re done.”

Ivor Pine said: “Nice move posting antisemitic ramblings during the holiest time on the Jewish calendar and in Brooklyn of all places, where Jews have been part of the fabric since the 1800′s. Safe to say you can kiss your business goodbye.”

In the words of Brokelyn, “we know someone who isn’t being invited over for latkes this year.”

Or, as they say in Brooklyn, “fuggedaboudit.”