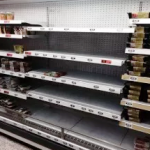 Major British supermarket chain Sainsbury’s has come under fire after the kosher section at one of its branches was reportedly emptied out on Shabbos due to fear that anti-Israel protesters might ransack it.

The move came a day after rioters sacked a Birmingham branch of rival supermarket Tesco, throwing food products on the floor while calling for the chain to cease stocking Israeli goods.

The bare kosher section at the Sainsbury’s Holborn branch in central London was first revealed by actor Colin J. Appleby who tweeted an image of the empty shelves. Appleby claimed that a member of the store’s staff explained the incident by saying, “we support free Gaza.” The actor also pointed out that the kosher merchandise included products that were manufactured in a number of countries besides Israel.

Facebook user Gavin Platman complained directly to Sainsbury’s. “I presume you are aware that Kosher food is produced in countries other than Israel?” he wrote, according to the UK’s Daily Mail. “You are therefore not making a political statement against Israel but instead are targeting a group based on race – i.e. Jews.”

After an uproar online, the food was quickly replaced. When contacted by The Algemeiner on Sunday, a representative of the store said, “nothing has been removed, everything is on display.”

In a statement to the Daily Mail, a Sainsbury’s spokesman admitted the initial decision was made in response to an anti-Israel protest nearby.

“It was the manager’s decision there and then – not company policy at all. We are a non-political organisation and we’re not coming down on either side of the argument,” the spokesman said. “A decision was taken by a store manager faced with a challenging situation outside the store.”

Also on Sunday, journalist and commentator  Jonathan Sacerdoti posted on Facebook audio of an exchange with a Sainsbury’s employee on the matter.

“There was a problem yesterday… there was one store in particular decided to take off the kosher products…” the employee said. “Somebody was going to try to cause an obstruction in the store so rather than people come out to the store and take kosher products off the shelf and whatever the manager… took them away.”

Sacerdoti said, “I’m phoning to express my extreme concern that in a rising climate of antisemitism a particular Sainsbury’s store chose to combat threats against products of interest to Jews by removing those products, not by removing the threat, which seems to me the more reasonable thing to do if you don’t agree with the threat.”

Responding to the incident on Facebook, The Times Columnist Melanie Phillips called it “Britain’s shame.”The representative apologized about the incident, denied that it was motivated by support for Gaza, and pledged that it would not happen at the Holborn branch again. She was however non-committal on whether it could happen at other stores again or if the supermarket chain had established company wide policy on how to handle the threat.

Tal Ofer, a member of Campaign Against Antisemitism UK told The Algemeiner, “It is unacceptable and sends the wrong message. If they suspect a security issue with the store, they need to get more security personnel. Removing Kosher product isn’t the solution.”

On Sunday, Appleby posted an updated photo of the kosher section at Sainsbury’s Holborn, this time fully stocked.

Listen to Jonathan Sacerdoti’s conversation with a Sainsbury’s employee HERE.