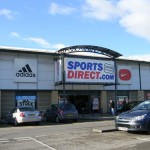 A British sporting goods store has apologized following an incident where two Jewish children were not allowed into the store.

According to the U.K. Jewish News, two 11-year-old boys were refused entry by a security guard at the sporting goods store Sports Direct, located in Hertfordshire, north of London, after the guard noticed the badges for a local Jewish school on their school uniforms.

The guard allegedly told the children, who entered the store with a larger group of children, “No Jews, No Jews,” said David Rosen, one of the boy’s parents.

According to the report, Rosen then complained to the store manager about the incident.

A spokesman for Sports Direct said that the security guard has been subsequently fired by the security company.

“I apologise for the distress and trouble that your son, you and the others involved suffered,” Sports Direct spokesman Simon Bently said in a statement to Rosen.

According to the British-Jewish watchdog group, the Community Security Trust (CST), anti-Semitic incidents hit an all-time record high in July 2014 with 302 incidents reported, a 400% increase from the previous year.