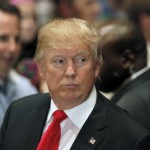 Following Donald Trump’s suggestion that Muslims be banned from entering the United States on a temporary basis, members of parliament in the United Kingdom will debate banning him from their country.

More than 500,000 people signed a petition requesting the ban, forcing the House of Commons petitions committee to schedule a debate session on Jan. 18 in Westminster Hall. Read more at The Guardian.